Tesco: Have your pet groomed while grocery shopping

Shop
Having your pet groomed while grocery shopping is an idea currently being trialled by Tesco in an Extra store in Cardiff. 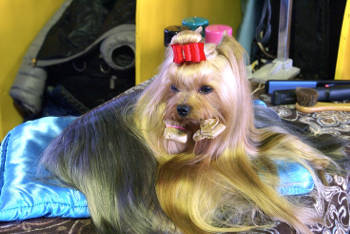 Tesco has been trying to enliven its Extra stores lately: the supermarket chain suffers from fierce competitors (Aldi and Lidl to name but a few) and aims to win back its customers with appealing offers and services. One way is to set up concession stands for fashion brands such as Burtons, Dorothy Perkins and Evans in five of the biggest Tesco stores. The concept is still being tested but Claire's Accessories, Mothercare and Timpson are also interested.

And, as reported by The Grocer, another way could be pet grooming, which makes sense since Matt Davies, Tesco's UK & ROI new Chief Executive, filled eight years of his successful career as Pets at Home's CEO. So if you live in Cardiff -and if you have pets-, you'll be able to try this new Pet Den service in Culverhouse Cross Tesco Extra store.

"We’re always looking at new ways our stores can best serve the needs of local customers" explains a Tesco spokesman, "so we decided to trial introducing some great brands to five stores which complement our existing offer, including plans for a Pet Den at our Culverhouse Cross store in Cardiff".

The recently opened Sheldon Retail Park is in its second phase of development now. Among the outlets which will open in the coming month is a brand new M&S food store.

Habitat just re-opened the doors of its flagship on Tottenham Court Road in London, partially renovated.

As of April 2017, M&S had 979 stores throughout the UK. Considering the fact that this massive conglomerate was first established in 1884, many consumers will be surprised to learn that they are planning to close no fewer than 100 stores by the year 2022.

Berlin has just welcomed the first luxury grocery store exclusively for cats and dogs, with ready meals, grilled meat and small cakes. Newly arrived in Germany, this concept is now being developed in the United States.

Chain stores related to the news
Tesco > All news Tesco