Food/Health
Japanese researchers have finalized, after 10 years of research, a genetically modified onion that doesn't make you cry while you're peeling it. If it has kept its flavour and nutritional values, it however lost its odour. 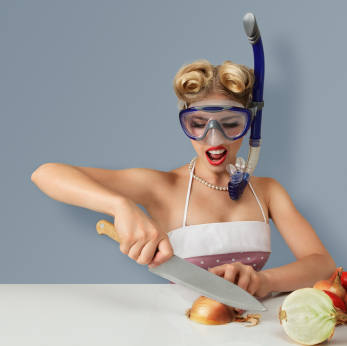 For nearly 10 years, Japanese researchers from the agribusiness group House Foods have been working on an onion variety that prevents from crying when being cut. In 2002, scientist Shinsuke Imai's team published the results of a primary study pointing to the existence of alliinase, an enzyme responsible for the tears when slicing the vegetable.

Thus, the onion gorges itself with the sulphur contained in the soil during its grown. When chopped, the alliinase is released and creates a reaction by entering into contact with the sulphur in the different layers. As specified in an article from the French economic newspaper Les Echos, the result of this reaction settles in the lachrymal fluid and changes into sulphuric acid. The purpose of the lachrymal fluid being to protect the eye, the body responds to this "attack" with an additional production of tears.

Having genetically isolated that enzyme, the research team has developed an onion range that can be sliced without a tear. Likewise, they took the opportunity to reduce its odour and preserve the consumer's breath. It should be noted that Shinsuke Imai had already received an IgNobel after its primary study was published in 2002, that price rewarding scientific researches deemed to be useless. Furthermore, House Foods hasn't shared any information yet regarding its commercialisation and its use in curries and other condiments sold by the brand.

At a time when blue gold is already a challenge for many countries, the Casa del Agua bar collects, distills, purifies and re-mineralises Mexico rainwater, in front of the client. Served and sold, it retails at 40 dollars for a 600mL bottle.

Aldi to Double Their Store Presence in London

Aldi have announced plans to more than double the number of stores they have in London by the end of 2025. The German owned discount supermarket chain currently has 45 stores located within the M25 and wants this to rise to 100.

McDonalds to Only use Paper Straws from now on

McDonalds has announced it is set to replace its plastic straws with environmentally friendly paper straws in all of its stores within the UK and Ireland.